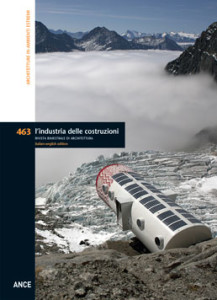 The theme of this issue – Architecture in Extreme Environments – ranges through different geographical positions and climatic conditions. Fascinating, yet hostile to human inhabitation, they take us back to the imagine of the frontispiece, to the origins of Architecture and the ideal primitive condition that forces man to confront nature. Though adverse to human presence, it is not to be contrasted but instead engaged in a dialogue using the correct tools and leaving aside useless excesses. This collection of unusual projects speaks on the one hand of man’s endless desire to take on challenges, his constant readiness to invent means and ways for overcoming the limits imposed by nature. On the other hand, it speaks of how the visions and imaginative work of different avant-garde movements from the 1960s and 70s provided important lessons and suggestions, together with a useful repertory of formal solutions  applicable to the temporarily occupied spaces of Antarctic research centres. These elementary and sophisticated constructions employ innovative technologies and experimental approaches to construction to create welcoming and self-sufficient environments that allow man to explore difficult and uncontaminated natural landscapes either to learn about them or simply enjoy them in silent contemplation. These constructions must clearly and efficiently respond to the basic needs of human survival, without any super-structure. They are the result of a design process controlled in all of its phases, from concept to fabrication to construction. These fantastical machines for exploring environments or small refuges positioned within breath-taking panoramas proudly display their difference from their surroundings. They become landmarks from which to observe natural phenomena or in which to rest after a tiring hike. Architecture that searches for new spaces of action will soon find itself working to develop projects for space stations in non-terrestrial environments. As Giuseppe Saponaro’s interview with Franco Fenoglio of Thales Alenia Space tells us, architecture will strongly underline its primary role as a fundamental tool for establishing a meaningful relationship between man and the environment. This conquest assumes paradoxical connotations when compared to the marginal role the profession is afforded in a country such as Italy. Here, despite the urgent need for intervention, territorial transformations have recently come to a grinding halt, unprecedented in the country’s history and with consequences on development at all levels: culture, society, economics and employment. 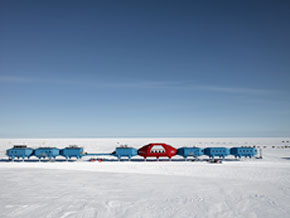 The international competition to design and construct a new British research station in the Antarctic, announced in 2004 by the British Antarctic Survey in collaboration with the RIBA and Malcolm Reading Consultants, was awarded to the London architectural practice Hugh Broughton Architects. One of the main requirements of the new project was to create a station that was mobile and moveable to different areas of the Antarctic. One of the primary items on the significant list of programmatic requirements was linked to the production and prefabrication of the individual components, realised in Cape Town, South Africa. They were transported to the site on a ship able to moor off the edge of the ice shelf. The pieces were dry assembled in relation to the maximum loads that could be supported by the ice shelf floating in the ocean: 9.5 tonnes/square metre. Assembly times and the position of the entire research station had to adapt to the period of natural light in the Antarctic. 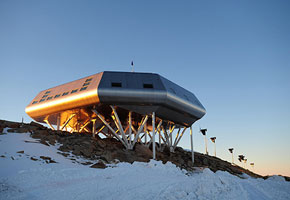 In 2004 the International Polar Foundation (IPF) was commissioned by the Federal Government of Belgium to design, build and manage a new research station in the Antarctic. The first “zero emissions” station in the world is situated in the Antarctic at 72° South and 23° East, atop the summit of a granite rise, north of Nunatak Utsteinen in the Sør Rondane mountains. The design is an effort joined by various specialised companies coordinated by the International Polar Foundation. The engineering and architectural design was entrusted to Philippe Samyn & Partners, who were asked to define the morphology and structure. The Belgian company BESIX was the general contractor for the construction of the station. The selected site is a rocky rise that provides a more secure foundation than an ice shelf floating in the Ocean at the edge of Antarctica. 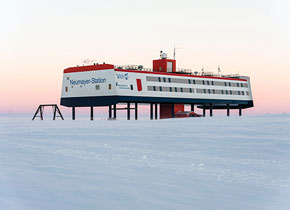 The Neumayer Station III sits atop the floating “Ekstroem Ice Shelf”, situated off the coast of Queen Maud Land at the edge of the Antarctic Continent facing the extreme southern regions of the Atlantic Ocean. The new station, completed in 2009, substituted its predecessor, the Neumayer II, in operation since September 1992. The Neumayer II was deemed unserviceable after little more than a decade owing to the way it was built. In particular, its rigid connection to the ice shelf, constantly shifting toward the sea, coupled with its rigid anchoring at a very precise foundation height, caused deformations to the metal shell of the portion above ground under considerable snow loading. For these reasons, the new research station consists of two elements: a foundation system and the building itself. 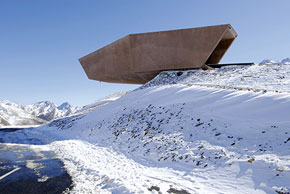 The museum pavilion at the summit of the Timmelsjoch, founded on Austrian soil and projected toward Italy with a sixteen-metre cantilever, marks the border between these two nations. Designed by Werner Tscholl Architecture, the project is part of a wider programme that is a hybrid between the regular maintenance of an infrastructure and a plan to re-launch tourism. The Programme was initiated in 2007 to mark the upcoming 50th anniversary of the opening of the pass. The programme called for the realisation of five panoramic stations, united by the use of the same material: an experimental concrete obtained from local stone. The spirit of the operation looks to enrich and heighten the attractiveness of the site by inserting minute structures for tourism but at the same time to protect the original character of the design and its perfect integration within the landscape. 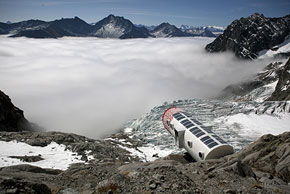 The Gervasutti Refuge by LEAP Factory is midway between a work of architecture and a design object. The layout was imagined more as a product than a building; implementable, personalisable and saleable, with the ability to adapt to different locations. The research of LEAP, an acronym for Living Ecological Alpine Pod, focuses entirely on making extreme sites inhabitable, primarily remote mountain regions, while fully respecting existing environmental conditions. The refuge is an artificial capsule balanced on a rocky outcropping 2,835 metres above sea level, atop the Mont Blanc massif. The designers chose not to camouflage their choices within this icy setting; instead, the structure stands out as an alien presence inspired more by the technologies of alpinism than the natural elements of the site. 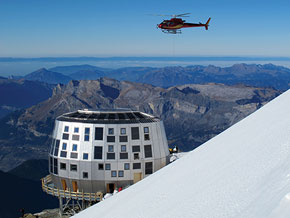 The new Goûter refuge clings to the mountainside at 3,835 metres above sea level, along the legendary “Via Normale francese al Monte Bianco”. In 2005, the notable environmental impact of the pre-existing refuge, coupled with the gradual obsolescence of its materials, convinced the Fédération Française des Clubs Alpins et de Montagne that the time had come for its substitution. The functional programme for the new refuge includes everything required to host up to 120 visitors: change rooms, toilets, bedrooms, a kitchen and infirmary, together with staff quarters, for a total of 720 square metres. The time allotted to complete the project was driven above all by climatic conditions, in some cases extreme; therefore the construction took place over the course of three seasons, between 2010 and 2012.  Building materials were helicoptered on site; the location was identified in the wake of accurate geological studies of the quality of the rock. The results were determinant to the decision to realise a portion of the building as a cantilever, to avoid excessive loading on the snow, but also to favour ventilation and provide access to the metal skin. 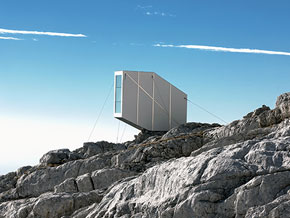 Ljubljana-based OFIS office designed this mini-cabin for the Alpine Association of Slovenia. It sits on an outcropping at 2,260 above sea level, just north of an existing refuge. This highly iconic, tall and narrow prismatic volume is exposed to sudden temperature changes and snowfalls of up to 10 metres in this area of the Julian Alps.The cabin is a small and intentionally foreign architectural object. It is something out of the ordinary, whose interaction with the mountainous landscape occurs through the contrast between the artificiality of its forms and the organic irregularity of the rocky site. The volume challenges the limits of statics and every sensation of vertigo; the small base anchored to the rock, a cantilever toward the rocky void below and thin steel cables all contribute to a precarious and simultaneously reckless appearance. The external aluminium skin is covered by a protective film that offers particularly effective protection against ultraviolet rays, snow and wind; the panels also include an inner layer in polyethylene that increase durability, despite their very low weight. 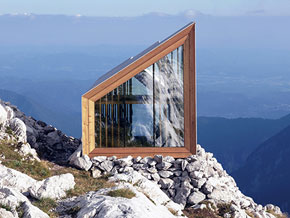 The Monte Skuta refuge was created during an educational workshop entitled “Living in Extreme Environments”, presented in 2014 by Rok Oman and Spela Videcnik from OFIS Architects, at the Harvard Graduate School of Design. During this workshop, architects and students explored the challenges linked to the construction of buildings in rigid alpine contexts. This small refuge is the result of a choral work and brings together the contributions of numerous actors: the concept is the work of students, explored by OFIS and examined by AKT II to understand its structural components, incorporated suggestions provided by the alpinists and mountain climbers Anze Cokl and Milan Sorc. The phase of construction, completed in only one day, involved the Slovenian Armed Forces and the Ljubljana alpine rescue service. Despite the small size of the project, it is the result of a delicate and engaging collective undertaking, owing to the problems linked to the concept of a building located more than 2,000 metres above sea level, in an environment wholly devoid of any form of infrastructure. 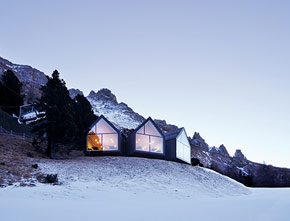 Peter Pichler and Pavol Mikolajcak were awarded the competition to design a new mountain-top refuge in Alto Adige Dolomites in 2015. Situated beside an existing chairlift, the building is accessible via elevator or from the edge of the ski run, using a panoramic terrace that also works as an entrance and a meeting and rest point for skiers. The architects were inspired by the image of a tree; a trunk emerging from the ground that spreads out into different branches. The semi-hypogeal building offers a twofold perception and a different relationship with the landscape depending on the point from which it is viewed or approached. Alighting from the chairlift, the only visible part of the building is the roof. The volume, situated at a lower level, is imperceptible from this point, while the profile of the roof echoes the rhythm of valleys and peaks of the surrounding landscape, without obstructing the view.