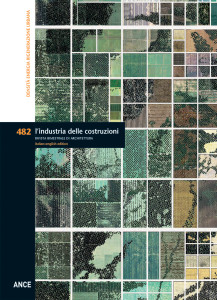 For several years, Europe has been involved by an active debate on directions and tools for the sustainable urban development. Recent urban policies within the European Community have mainly based around actions of transformation, regeneration, construction over and inside the built environment; however, it is now impossible to delay a turnaround concerning settlement attitudes and the awareness toward the need for an all-round ecologically responsible behaviour has increased. Many studies focus on interactions between density and nature and examine the concept of density, on its measurement and limits. In France, in fact, Jean-Michel Léger and Béatrice Mariolle are carrying out research on the intermediate areas between cityside and countryside, comparing densification scenarios with new low-density models that seek a connection with farmlands. Paola Viganò’s proposals for interventions on French and Belgian areas highlight strong contradictions hidden in the compact city model and show how urban growth and degrowth no longer express a collective project of redistribution of resources and opportunities; rather, they represent the result of a clash between financial capitals, taking place in the form of concentration and polarization projects. The essays and the projects presented in this issue fit into this debate and share significant considerations, through experiences carried out in contexts such as France, Germany, Switzerland and Luxembourg.

ACTORS AND DESIGN STRATEGIES IN URBAN REGENERATION PROJECTS. THE EXAMPLE OF PARIS – Pg. 10 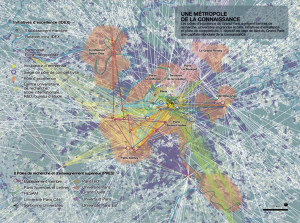 From Mitterand’s Grands Travaux of the 1980s to the present, Paris continues to change; from north to south, from east to west, it is a city in constant movement, an immense and endless construction site. Paris is a city that highlights the strong political will of various presidents, each of whom has left a strong mark on the urban and social evolution of the city. Given the complexity of urban transformations, to make them truly feasible on the one hand France has always created true and proper ad hoc management structures and, on the other hand, constantly analysed its urban planning instruments and regulations in order to bring them closer to the real needs of the city and society. This binomial of management (Management Company and Legislative Instruments) has ensured that in France large urban transformations are realised on schedule and with quality, guaranteeing their economic, social and urban sustainability. 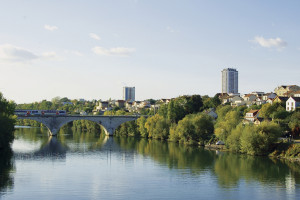 In France, the difficulty faced by architecture in dealing with questions of urban design through a holistic approach that considers the city and its periphery as a whole, was not overcome either during the Trente glorieuses (1950-1970), when the design of the territory excluded any dialogue with architecture, nor during the period of the projet urbain à la française (1980-2000), when the profession was enriched by new values linked to the study of urban forms, though without ever linking up with a true organic vision at the scale of the territory. From 1980 to 2000, a fecund debate made it possible to expand the discourse on a trans-scalar approach, in opposition to the architectural and urban modernity of previous decades. The definition of the design of the city and the territory, which takes form in the project for the Grand Paris, contains new operative concepts. They include “drawing” or the “figure of the whole”, which make it possible to speak of a new theoretical-practical turning point.

THE RELATIONSHIP BETWEEN ANTHROPIC AND NATURAL SPACE IN A PROJECT FOR REBALANCING THE TERRITORY – Pg. 34 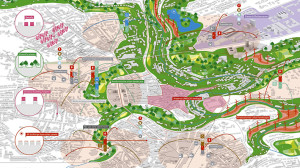 The interest in the “vast scale of dwelling” brings a greater responsibility toward the entirety of the “territory as a common good”, placing the accent on rediscovering the urban nature of the territory and the territorial nature of the city. Between 1990-2000, the emergence of disciplines linked to the landscape and the discussions of the Territorialists also consented a new way of approaching local heritage and “place”, re-establishing a relationship between the forms of human settlement and geography. This approach was not without decisive concrete results. It is enough to remember how, in the debate on the fate of our spaces monopolised over the past twenty years by the paradigm of the dense and compact city, we often forgot how the city and its non-self – the territorial context in which it is situated – are intimately linked by an inevitable sense of reciprocity that is not necessarily hostile toward the search for a greater sustainability of dwelling. Despite this, the question of the “sustainability” of future settlement inserted within the framework of this renewed look at the entirety of our territorial reality, has in the end fully exposed a twofold necessity: on the one hand that of confronting “problems at the large scale”, oriented toward an integrated and organic reorganisation of the territory; on the other hand, that of implementing an inter-scalar perspective from which we can read and interpret and through which we can plan and design.

THE ROLE OF THE LANDSCAPE IN THE PARIS-SACLAY PROJECT – Pg. 54 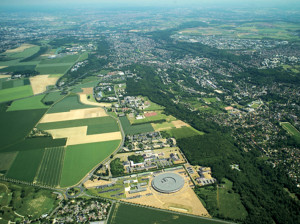 The challenge of the Paris-Saclay project was that of establishing a coherence and relationship among a multitude of places and actors within a well-defined physical scenario. The success of the project and its completion over a period of decades necessitate a process of continuous comparison among the numerous and different actors involved. The project embraces three dimensional scales, which also represent the three fil rouge of the project: Paris-Saclay at the territorial scale (an area of 7,700 hectares), Paris-Saclay at the scale of an urban campus (an area of 650 hectares), Paris-Saclay at the scale of the quarter. The territory of the Plateau is characterised by a number of potential continuities, unified and identifiable systems that can inspire a clear and recognisable backbone for the project: the series of forested hills and valleys that connect the Plateau with the plains around them. The operation to be pursued is that of completing and amplifying existing spatial conditions, integrating them with the system of mobility infrastructures, public transport and slow mobility. 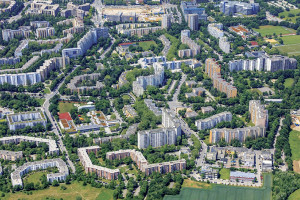 The European Green Deal ratifies the beginning of the race toward energy efficient cities, defined as net zero energy, that will create new forms of sustainable and resilient dwelling. Our cities are where it is most necessary to establish strategies of action and measures of intervention. At the same time, they become a privileged field of research and experimentation for defining a truly effective response to these problems. Despite the fact that the majority of urban policies claim to be concretely committed to planning more resilient cities, it is not yet clear whether the approaches being pursued, characterised by strategies of partial, sector-specific intervention, divided by scale and discipline, are truly effective. There is mounting evidence that what is required is a more systemic and integrated approach to action in order to reach a level of environmental and energy awareness congruous with the objectives established by global organisations. This is the context in which we find diverse design strategies and actions developed recently, both relative to new projects for the recovery and adaptive reuse of the existing: from the development of the idea of the “Eco-Quarter”, to the energy efficient refurbishment of interstitial spaces and spaces of proximity, to operations that combine energy requalification with the search for a growing functional and social mix.

ENERGY, DENSITY, FORM FOR A PROFILE OF THE CONTEMPORARY MEDITERRANEAN CITY – Pg. 86 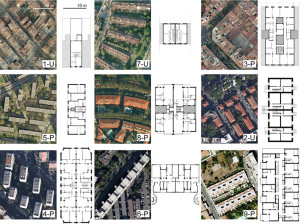 Man’s approaches to inhabiting the environment have always been characterised by an intensity of use of space, identifiable in the concept of density. Density has always existed as an inherent condition of dwelling. Until the advent of modernity, the concept did not exist as we recognise it today in fields linked to practices of settlement. Beginning in the urban era it became a central theme for those disciplines concerned with the governance of the territory or the environment in its totality. Today it has assumed new roles far from its original nature, which lead designers to employ it also in exploratory terms. In recent decades we have witnessed a lively debate that gives the model of the compact European city a character of greater sustainability both in terms of its capacity to reduce impacts on the environment and to activate more vivacious social models and a higher quality of life. This debate has emphasised the centrality of two essential aspects for comprehending the environmental and energy profile of this model of settlement: recourse to the urban scale and the physical-spatial value of density. The former is most suited to describing the spatial characteristics of the building elements of the urban system (lot, block and street network). The latter allows for a comprehension of the link between them and the energy performance of the built environment.